There’s a simple formula I learned for making major federal policy change: Change = Moving Stories + Legislative Champions + Relentless Advocacy Coalition. There are many things one might add, like procedural opportunities created by must-pass legislation or the opening of political windows early in a presidential term. Like all such formulae, it is an over simplification, but still useful as rough guide to strategy.

These were then the guiding principles my colleagues and I followed in our attempts to drive the implementation of the policy ideas set out in the Institute of Medicine’s 2008 study, Retooling for an Aging America: Building the Health Care Workforce.  While many funders were impressed with the majesty of the IOM, when I was first approached about paying for a study in 2006 while I was at the Atlantic Philanthropies, I opposed the idea arguing that we did not have the organizational infrastructure in place in the aging sector to take advantage of the opportunity and it would be squandered.

When it became clear that the study was going forward with or without Atlantic, I agreed to participate in funding the IOM’s work, but began furiously putting together the coalition that would be necessary to press for implementation of the report, with the particular help of Nancy Lundebjerg, then the COO of the American Geriatrics Society. When I returned to The John A. Hartford Foundation in 2007, I was able to continue the coalition building work with my former colleagues at Atlantic and The Meridian Institute  to set up what eventually became, the Eldercare Workforce Alliance.

It was quite a challenge to put together an effective coalition in advance of knowing what would be in the report, but I knew that if we waited for it to come out before starting to organize, we would lose time we could not afford, especially with the 2008 election year coming up. Many stakeholders in the health care industry, health professions, union, and consumer and family groups came to the table. Some did not – I was always disappointed that we could not engage the large primary care physician organizations: the American College of Physicians and the American Academy of Family Practice. Nor could we hold on to SEIU, the American Medical Association, or the National Association of Social Workers, which all spun out for their own idiosyncratic reasons. But with twenty odd organizations in the mix, including the American Geriatrics Society, AARP, American Nurses Association, and Leading AGE, it was enough to get started.

Our timing was reasonably good – the report was issued in April 2008 and EWA was funded before the end of the year. The legislation introduced by Wisconsin’s Senator Kohl, based on the report, was incorporated into the senate’s health reform bill developed in 2009 (AKA the ACA) which was eventually finalized through the reconciliation process in 2010. Of course, getting appropriations to go with authorizations, regulatory implementation through executive agencies, and continued attention has been an ongoing struggle. Nonetheless, I remember being wowed by some of the moving stories from health care professionals, paraprofessionals, and family caregivers that EWA has brought to DC to document the many barriers that keep the quality of actual care well below what is already possible. 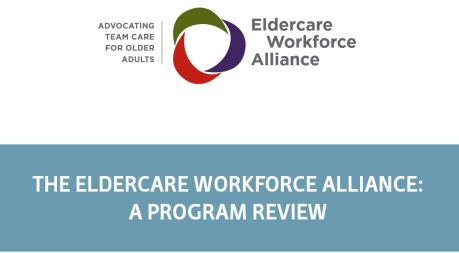 While EWA has done great work, the job is not done. Many recommendations have been ignored or miss implemented. This report, commissioned in 2015 describes the process and the progress of The Eldercare Workforce Alliance and its efforts to create an effective workforce to care for older Americans. It is work of which I am tremendously proud and for which I continue to have high hopes.  Older Americans deserve a workforce competent in their care.

My Tweets
The Hops Honey
From a Pawned Smith Corona

Reflecting on life as a doctor, social scientist, and a person.

Dispatches from a philanthropy program officer

An Ounce of Evidence
Not Running a Hospital

The latest news on WordPress.com and the WordPress community.